Open source databases have a monetization problem, even the companies themselves will admit it. In announcing their new proprietary license MongoDB claimed it was necessary or cloud vendors could “capture all the value”. Redis Labs was so concerned they felt licensing changes were necessary to maintain a “sustainable business in the cloud era”. As these companies abandon open source for proprietary licenses and direct blame elsewhere, we couldn’t shake the feeling that the problem lied not with external forces like licensing and cloud vendors, but instead with the approach taken towards monetization.

It wasn’t always this gloomy. With 2009 began the start of an exciting new era. That year alone we saw MongoDB, Redis, and Hazelcast launch with Aerospike and Couchbase seeing their public debut just a year later. This new breed of database didn’t just have a lack of SQL in common, they all offered strong Open Source offerings paired with enterprise editions and support contracts which would pay the bills. The benefits of open source were proclaimed far and wide by this new cohort, and they were rewarded handsomely with rapidly growing user bases.

"The Golden Age Of Open Source Has Arrived"

The Open Source community had kept up its end of the bargain. Thousands of tools and libraries were written to support these new products. Unpaid maintainers spent untold hours performing the thankless task of packaging the software for distribution across the many platforms in use, posting bugs, submitting patches, and requesting features. Easy access to the software and broad community support served to jump start a virtuous cycle leading to substantial growth in very short periods of time.

But the problems began with the first push to monetize. The same companies that had been so innovative in their marketing and use of open source fell back on traditional enterprise sales tactics. Users accustomed to installing software with a simple “apt-get” or “docker pull” at little to no cost were now expected to suffer through hours long sales calls, pricing that was wildly out of proportion to the value provided, and artificial limitations on what hardware could be used. In late December we began an analysis comparing cumulative open source adoption (docker pulls) with paying customer counts published by the companies themselves1. The results have been dismal: 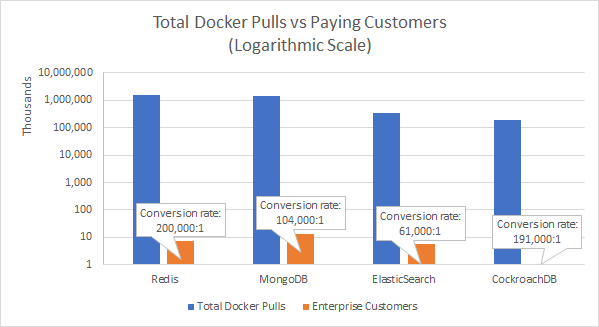 Editors note: I’m not a fan of log scale graphs but it was necessary for enterprise customers to be visible at all.

In September of 2014 a MongoDB employee wrote a blog post which showed the industry had expected a conversion rate of 1000:1. Six years later we see that in reality conversion rates were more than two orders of magnitude worse. This would still be fine if margins were high, but the published financials show this not to be the case. Both MongoDB and Elastic are public companies with financial statements showing they are losing nearly $40mln per quarter. Redis Labs just completed a series E where they confirmed they are not cashflow positive let alone profitable, and CockroachDB admits to having only 50 enterprise customers. Combined these four companies have raised nearly a billion dollars in venture capital.

Our own experience shows customers do in fact want the features available only in enterprise editions and are willing to pay – many of our users have told us they seriously considered Redis Enterprise before switching to KeyDB. The problem is when taken as a whole these “enterprise” products offer an inferior experience to the now mature Open Source editions customers are already using. High prices, aggressive sales tactics, and arbitrary restrictions all serve to limit adoption of paid offerings.

The situation appears eerily similar to the early days of Napster and filesharing, where dumbfounded music execs tried to dictate terms to a market that now had other options – this time without the legal ambiguity. As was shown with iTunes we believe customers are willing to pay for superior software, but they need to be offered a fair deal with reasonable terms and clear value first.

When we decided to form a business around KeyDB we didn’t want to make the mistakes of the past. Instead we had a simple premise: Open Source software is sustainable if extras are offered at a fair price with the convenience users expect. We believe licensing should not be complicated by artificial restrictions. You can use open source software unrestricted on whatever hardware you want, so why pay per core or gigabyte for a professional version? Isn’t that a downgrade?

KeyDB is fully Redis compatible with up to 5x better performance, and many additional features such as Active Replication and subkey expiration. True to our word KeyDB Enterprise is offered with upfront and fair pricing and includes advanced features such as FLASH storage and MVCC. KeyDB was designed to save you time and money. We think you’ll be happy with the results.